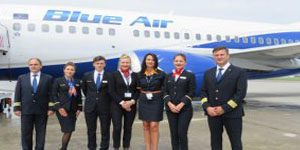 Blue Air is a Romanian airline headquartered in Bucharest, with its main hubs at Henri Coandă International Airport and Turin Airport. Since 2016, it has become the largest Romanian airline by scheduled passengers flown. Blue Air started operating in December 2004. Blue Air initially operated domestic and international flights. Blue Air resumed domestic operations in 2015 starting with  flights, followed by further routes in 2016. Low-cost airline Blue Air expects a turnover of EUR400 million in 2017 and to carry approximately five million passengers, which translates into an increase of over 35% for both indicators compared with 2016, said the company’s general manager Gheorghe Racaru.

Finding your dream job is not difficult but you need to direct yourself with strong commitment and right efforts. Luckily, one day you will be able to earn money with a higher level of satisfaction and it will be true growth for your career. What are your interested jobs, click the below link and apply now !!!